One day I noticed my horse had suddenly become very stiff, and was dragging his front legs and appeared quite lethargic. I knew something was wrong as he was normally very forward moving and this particular day, he just seemed really tired. I had only had Chief for about 5 or 6 months but he was always energetic. I had noticed he was spooking at things a lot more frequently than he had when I first got him, but didn’t make any connection with this at the time.

I took him to our vet who said he was most likely tying-up so we treated him for this over the next couple of weeks, but he continued to get worse. Chief was extremely lethargic and dragged his feet when walking and was reluctant to trot for more than a few steps and really didn’t want to canter. He normally loved to ‘go’ and could almost canter on the spot when being held back, so this was very out of character for him. I took him back to the vet for more tests and after a series of nerve blocks in both front legs and xrays,  eventually we were told he had a hole in his DDF tendon and early signs of ringbone.

The vets prognosis was not good and he suggested we put him out to pasture and retire him because it would take at least 12 months to heal and he may never be suitable for riding again. I was devastated to hear this news and I couldn’t afford to purchase another riding horse so my riding days looked to be over. I followed my vets advice and Chief became a companion horse. At no time did he ever appear lame on that leg and there was never any swelling or heat in the affected limb at any time. He would often hoon around the paddock bucking with his mates and looked perfectly fine. My husband thought Chief must be faking it because he looked okay out in the paddock. But if we took him out of the paddock and tried lunging or riding him, he was always very lethargic, dragging his feet when he walked and very reluctant to canter.

A year later I decided to get another vet out to scan his leg to see how it was healing, only to be told that there was no evidence of a hole and that scar tissue would have been visible if he did in fact have a hole in that tendon. We tried riding him again, only to find that he was exactly the same as day one – stiff in the front end and lethargic when ridden.

Our new vet did blood tests which revealed nothing abnormal, he also did a full lameness work-up which he passed. I knew he still wasn’t well though as he was still very lethargic. He also had horrible sores all over his underbelly that he scratched till they bled which he developed soon after we got him. I thought this was due to mozzies or midgies. I contacted Greenpet to get something for his skin and after speaking with Julie, we eventually decided to move him onto a friend’s property for a month to see if his skin and other symptoms improved when living in a different environment. Not only did his skin clear up but also all his other symptoms. Within a month he was back to his old self, he was no longer scratching his belly and no more lethargy!

I wish I had found Greenpet earlier, I can’t thank you enough for your help in bringing to our attention how grass can affect horses, which is something I never knew about. Our paddocks contain a mixture of grasses including setaria, rye grass couch and paspalum. We had always supplemented with DCP and Calcium and Chief never developed classic ‘big head’ symptoms, however it was due to issues with all of these ‘bad grasses’ in combination, which surprisingly didn’t affect our other horse the same, so we never suspected it to be due to the grass or his feed.

We have since moved Chief back onto our property and have him on the ProvideIt plan with Supreme minerals, XtraCal and GrazeEzy. We also feed Rhodes grass hay morning and night to reduce the amount of grazing he does. We are re-planting good grass and will continue to follow your recommendations.

Below are images of Chief’s belly with sores and hair loss, which has completely cleared up now so wasn’t anything to do with the mozzies either! 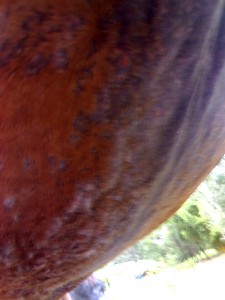