Augustine’s Healthy Skin Bundle – Vegan contains some of our favourite canine products for those new to the Augustine Approved brand (click below to read about each product).

Read more about this product

Augustine’s Healthy Skin Bundle – Vegan contains some of our favourite canine products for those new to the Augustine Approved brand (click below to read about each product).

What does it contain? 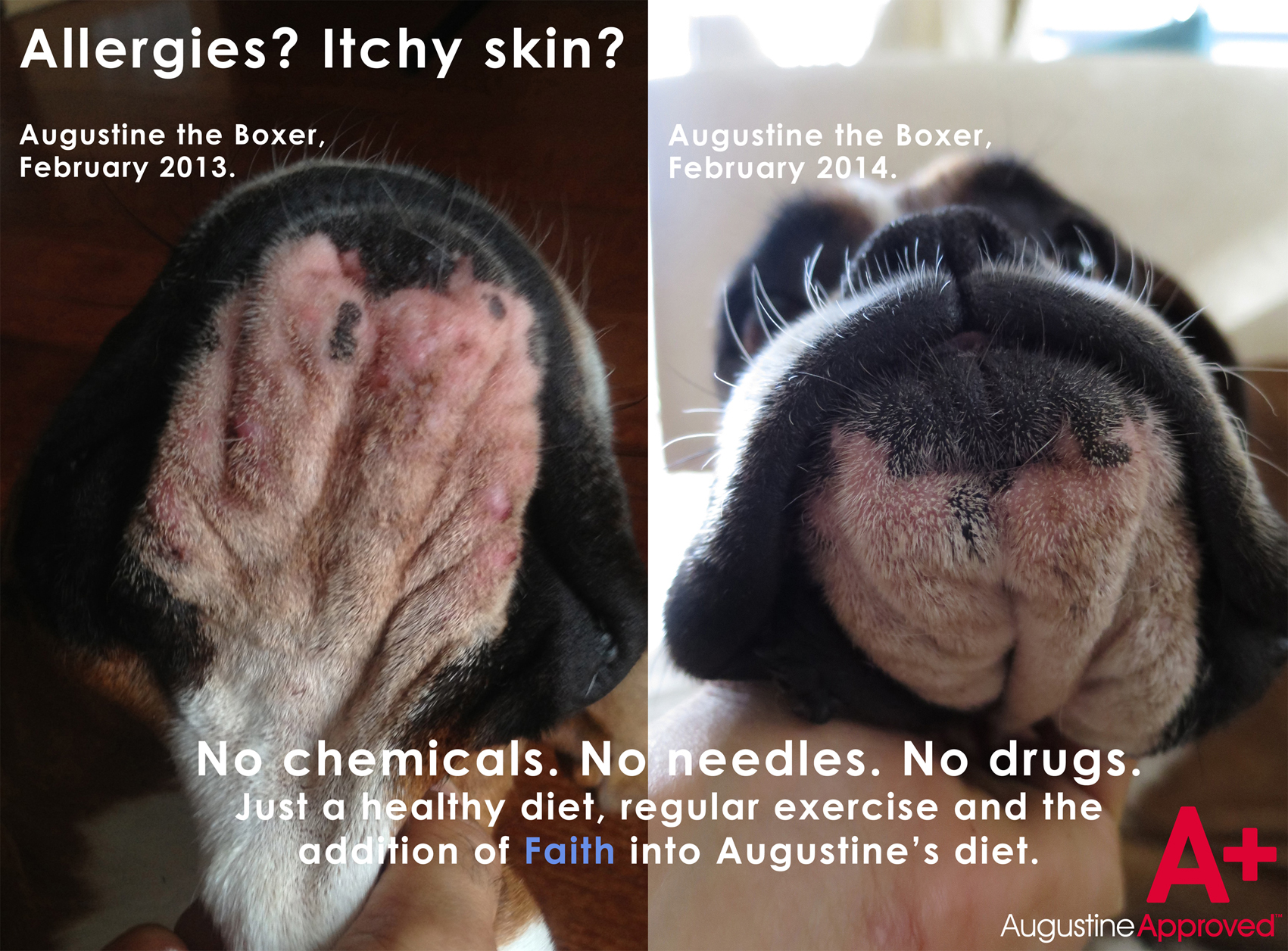 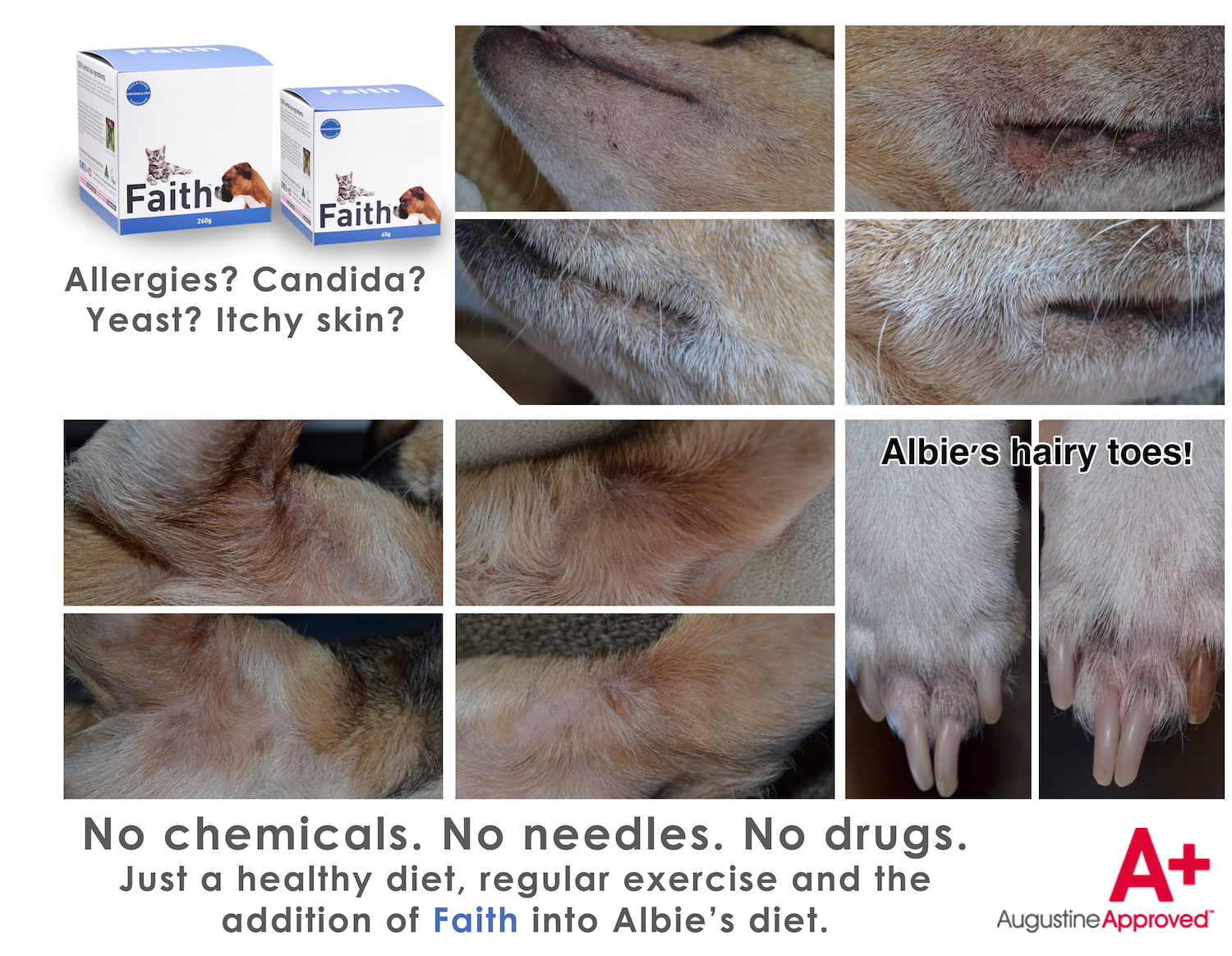 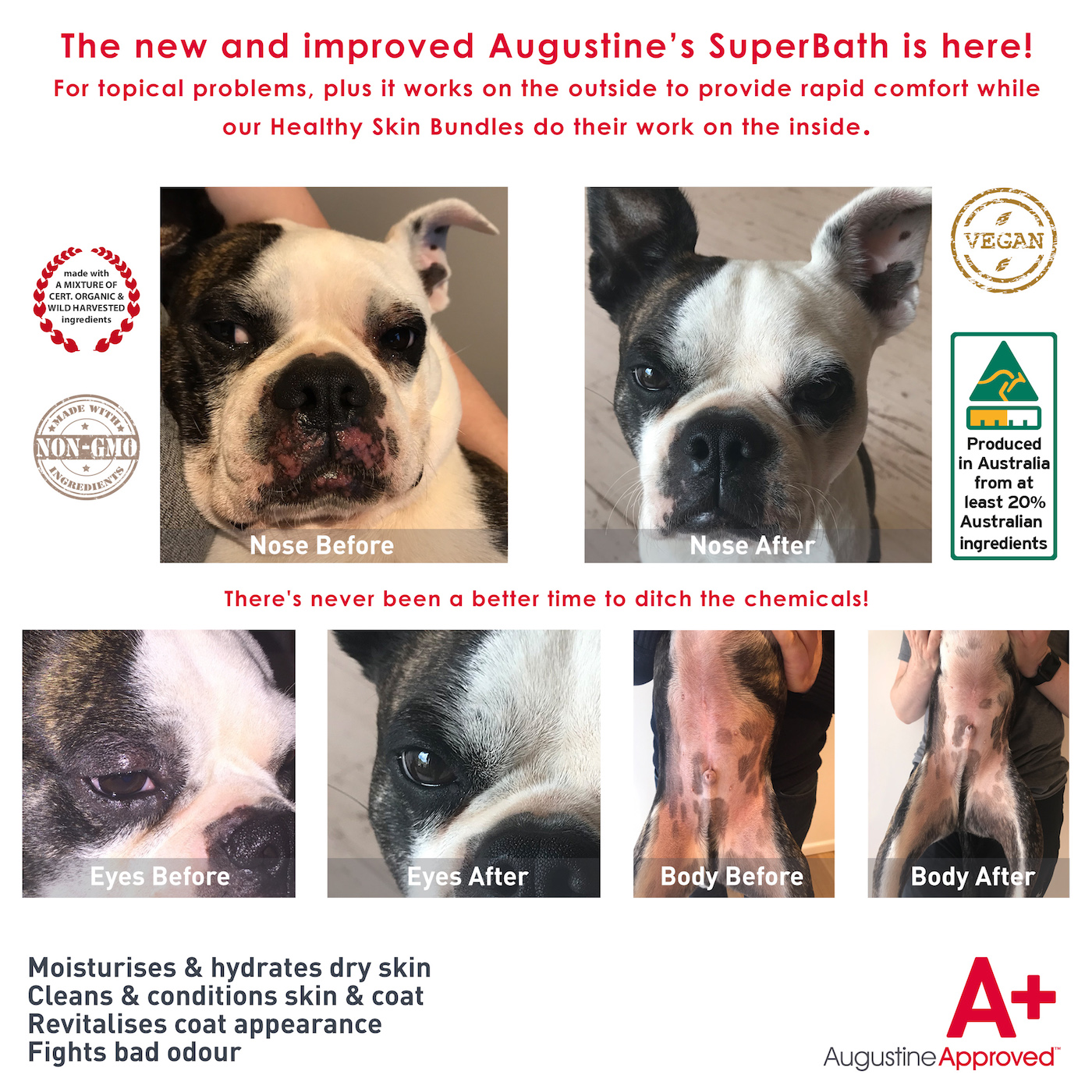 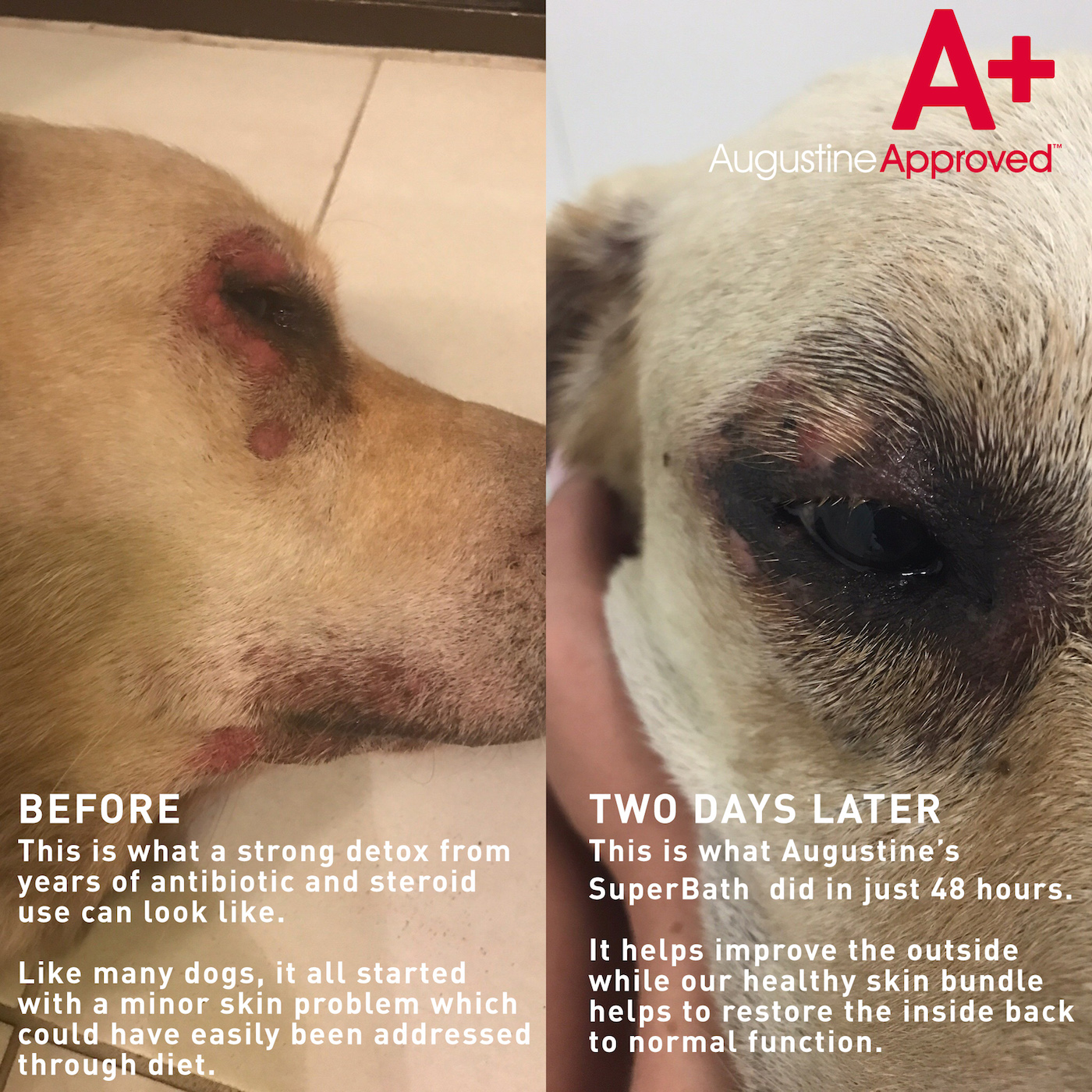 Please remember that for an improvement in skin problems, a good clean diet of unprocessed foods (including the removal of refined sugars) is highly recommended.

It’s important to ask that you research what Candida Albicans is. A yeast infection (more appropriately named a fungal infection) is a symptom of candida overgrowth. I won’t say much more on that but I encourage you to ask your best friend Google.

I believe candida to be a leading cause of cancer, and it can even mimic cancer. Recently we saw a dog that had $12,000 of chemo etc. and was about to be put down because the vet said nothing was working. The dog never had cancer – it was candida. The dog is doing okay but now they are working to restore the dog’s immune system after the vet destroyed it.

We had another customer with a dog that was vomiting every day for over a year. The specialist even stitched the dog’s stomach to its side to avoid bloat, even though he really didn’t know what the problem was. About a week into our treatment the dog was 100% fine – it was just candida overgrowth affecting digestion.

What’s the difference between the Original red label and the Vegan orange label bundle?

The only difference is which version of Augustine’s SuperBoost is in the bundle – Original or Vegan. The Vegan orange label is made for dogs that do not consume meat in their diet.  In short, if your dog eats meat then you should be purchasing this “Original” Healthy Skin Bundle.

Augustine’s SuperBoost (Vegan) is the world’s first and only 100% certified organic wholefood supplement formulated for dogs.

This nutritional powerhouse is suitable for dogs and cats and can be added to dry, canned, raw & home cooked meals.

What is the difference between the orange Vegan version and the red label SuperBoost?
Same ingredients.  Same goodness.  Both are suitable for ALL dogs.

However, the vegan orange label has been specially formulated for dogs living solely on a vegan diet. The balance of each ingredient is different to that of the red label. If you would like optimum benefit for a vegan dog then we suggest you select the Vegan orange label.

Why should I add Augustine’s SuperBoost to my dog’s diet?

Simply put, Augustine’s SuperBoost is just that – a boost. It helps improve quality of life and is often referred to as a life extender. It contains a range of high quality nutrients not found anywhere else.

No matter how well you currently feed your dog, Augustine’s SuperBoost is a great addition to any canine diet.

When consumed, Raw Coconut Oil has a role in:

When applied to skin, Raw Coconut Oil has a role in:

I am very happy with the Homeopathic FL Relief and have been using it for a few years now. No fleas anymore!

Simply Seaweed is great for my chihuahua’s teeth along with regular brushing and Vetzlife dental gel from Greenpet. The vet can’t believe how clean their teeth are for little dogs.

Love this product. Charlie is going to the toilet a lot easier since using the PetArk Petbiotics, Probiotic.

The Herbal TK Solution has saved my dogs from being subjected to chemical tick preventatives and it is so easy to apply to their collars weekly.

My little goat has a bilateral heart murmur and was given a week to live five months ago. Since I started with your products I can’t remember what a bad day looks like, his quality of life is so much better, he’s a happy normal little buck living his best goat life. We can’t thank you enough for the extra time with him it’s all we wanted for him!